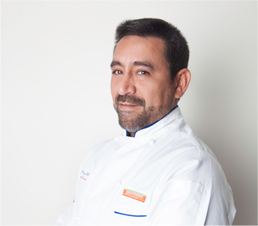 Coming from one of the most Prestigious Culinary Schools in The World, where He served as a Culinary Instructor at Le Cordon Bleu College of Culinary Arts, Miami from 2008 to 2012.

Chef Rios was also the Executive Chef at The Miccosukee Resort & Convention Center from 1998 to 2008, Chef Rios was responsible for overseeing the Day to Day entire back of the house operation, Recipe and Menu Development, Food & Equipment Purchasing, Food Costing, Quality Control, Maintaining High Standards of Sanitation & Health Regulations and The Training & Development of all culinary staff. In addition Chef Rios also served as an Interim Food & Beverage Director for over a Year and a Half.

Prior to Joining the Miccosukee Resort & Convention Center Chef Rios Owned and operated Chef-Aide, Inc., a fine line of Hand Carved Fruits and Vegetables with distribution to star rated hotels in the area from 1996 to 2002

Chef Rios, was also the Corporate Executive Chef of Gene’s Catering, Inc. from 1985 to 1996. During his tenure at Gene’s Catering, Inc. Rios was Responsible for the Day-to-day Commissary operation, off Premise Catering and overseeing two Private Clubs and three Restaurants, Recipe and Menu Development, Purchasing, Food Costing and Quality Control for All the Operations. In His Capacity of Corporate Executive Chef, was responsible in all aspects of the Kitchen at The Grand Prix of Miami 1986-1995 serving over 10,000 people. The Breeders Cup, One of Horse-racing’s Greatest Events serving 10,000 meals to Corporate Sponsors. Super Bowl-XXIII held at Joe Robbie Stadium in Miami, Fl. January of 1989. Super Bowl-XXV held at Tampa Bay Stadium in Tampa Fl. January 1991. Tail Gate Party for The N.F.L during Super Bowl-XXIV at Joe Robbie Stadium in January of 1995 serving 12,000 meals on each separate occasion. The Lipton International Tennis Players Championships from 1990 through 1996 in key Biscayne, Fl., serving 300,000 meals over a period of 10 days and 40 different menus daily. 1993 Volvo International Tennis Tournament at Yale University in New Haven, CT. Serving 250,000 people in a 10 days period.

In the aftermath of Hurricane Andrews, Chef Rios was put to a test when ” The Firm ” was asked to serve three hot meals per day for 8,000 Florida Power & Light repair crews, on forty eight hours’ notice, Rios and staff moved to Tamiami Airport and set up a makeshift kitchen, that served as headquarters for these Florida Power & light workers, The service was Continuous for three months.

In addition Chef Rios has had the Privilege to cook for two Former Presidents of The United States Of America, Ex-President of the United States George H. W. Bush During his Presidential Campaign in South Florida in the summer of 1987, and Ex-President Bill Clinton during the Summit of the Americas in December 10th. 1994 as well as 35 other Dignitaries from the Western Hemisphere.

During this long tenure in this Glamorous Profession, Chef Rios has had the opportunity to Entertain well-known world Celebrities, Movie Stars, Music Moguls, Sports Superstars and many influential People.

Chef Rios has built a Reputation by serving only the freshest quality of Food in a very Innovative and Creative way.

Taste of the Nation – 1993 Charitable Event
Meals on Wheels – 1993 Charitable Event
Cancer Link – 1993 Charitable Event.
March of Dimes Chefs’ & Wine Extravaganza 2005 & 2007 Charitable Event.
Rib fest 2006 Chef Rios was among a few Celebrity Chefs on hand to Judge the Famous Bar Be Q Ribs at the Air and Spice Park in Homestead, Fl. On November 4th. And on November 5th. Chef Rios performed a live Cooking demonstration in front of a large crowd.
Feast with the Beast at the Zoo. 2006 & 2007 an event, organized by The Zoological society of South Florida to raise funds for the promotion and preservation of wild animals in captivity, where 40 top area Chefs donated their food, time and talent to a crowd of over 1,200 guest.
Daily Bread Food Bank – Chef Rios has Donated Thousands of pounds of foods after every major catered event to help feed the needy in South Florida.

When it comes to superb event catering our in-house chef has created special menus for every type of event to bring you the very best. Offering five-star service and exquisite cuisine from all over the world, the food at your corporate party, company picnic, or social event will be expertly prepared and cooked fresh